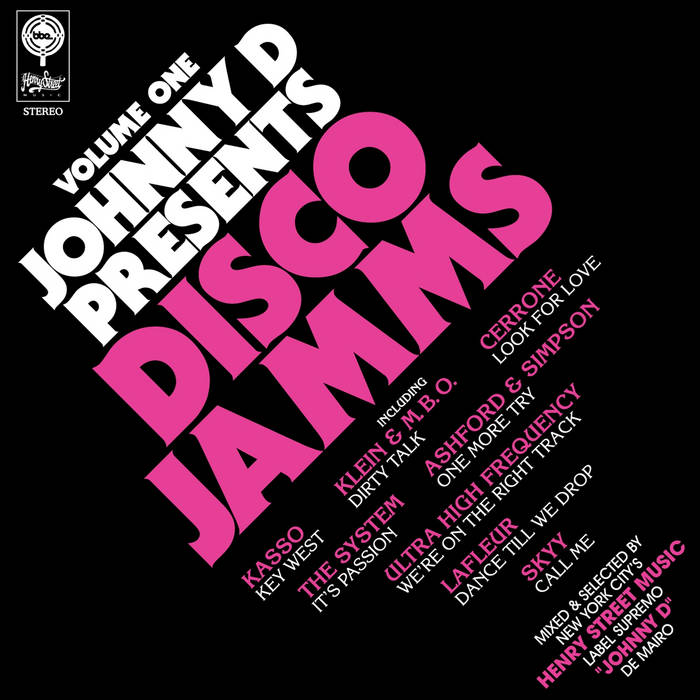 “The mark of a great DJ is one who knows that hip-hop came from disco. That is the truth of the matter...”Johnny 'D' DeMairo has always been about disco. It was something that underpinned his seminal house label Henry Street Music, the imprint he set up with Tommy Musto in 1993. It was a place where the particles of classic disco and the four-to-the-floor throb of house music were smashed together to create something new, something that would extend the life of these underground anthems and introduce them to a new audience.

Armand Van Helden, Kenny Dope, Lil' Louie Vega, Terry Hunter, DJ Sneak, Todd Terry, DJ Duke; they all turned it out for Henry Street, and tracks like Dope's 'The Bomb! (These Sounds Fall Into My Mind)' and Van Helden's 'The Funk Phenomena' made it a pivotal part of house music history.But the story starts much earlier than that in Brooklyn, New York, in the 80s. Born into a blue-collar Italian-American household, it would have been virtually impossible for DeMairo to avoid the streetlife happening outside his front door. Block parties, rollerskating, graffiti, disco, boogie, electro, freestyle and hip-hop were consuming kids from all backgrounds, of all colours.

At 12, he started to learn how to DJ using 'the absolute worst turntables ever made' – a pair of Lafayette T-2000s bought him by his father. The next year he got his first pair of Technics 1200 MK IIs, some of the first to arrive in New York. In 1981, he started playing neighbourhood and high school parties, before graduating to the block parties taking place in the recreation grounds and on the stoops of the now-gentrified Red Hook, Carroll Gardens and Brooklyn Heights. He quickly impressed the older DJs and armed with a stack of records on classic labels like Prelude and West End, he'd throw them together with Italo (or 'guido') disco tracks and Led Zeppelin.

His age didn't appear to be a barrier to New York's vibrant club culture. At 14, and in possession of a fake ID, he would make his way uptown to 254 West 54th Street in Manhattan, the location of the legendary Studio 54. Every Saturday night, he would be educated by its then-resident Leroy Washington, A DJ who'd moved to New York from Detroit in the 70s. Washington also owned the Lovelite club, where a young DJ called David Morales was resident, and Hi-Tech, a record store on Bleeker Street in Greenwich Village. DeMairo cites Washington as 'one of the most underrated DJs in history'.“He was fucking phenomenal,” he says. “He was on Thorens TD 125 MK II turntables which were, in my opinion, total garbage. He'd be doing things that didn't even make any sense. Never heard him off beat. You'd hear Madonna, Michael Jackson, Captain Rapp, Haircut 100, Billy Ocean, Van Halen, Brainstorm. Other big name DJs couldn't hang with Leroy. Technically, they weren't even in the same ballpark.”

Aged 15, DeMairo met local Brooklyn DJ Danny Cole, and though older than him, he found a kindred spirit. Cole was DJing every Friday and Saturday at the Plaza Suite, a mob-owned nightclub in Bensonhurst, Brooklyn, where there would be weekly live sets from people like Jimmy 'Bo' Horne and Jimmy Castor. He invited the young DeMairo to join him. “We'd kill that club on a weekly basis,” says DeMairo.Working in the various businesses owned by his extended family, he would make a wage during the day and then play the parties at night and on the weekend, while the mixtapes he distributed were slowly taking on a life of their own. Until any real money from DJing started coming in, he'd have to hide the growing mass of records he'd bought from his parents. “My father thought I was blowing all my money on vinyl. Which I was. Now 80,000 records later, I can remember where almost every record came from,” he says.

Meanwhile, his musical education continued in the ether. “Radio was incredible in New York,” he says. “There was Disco 92, WBLS with Frankie Crocker and 98.7 Kiss. I was just constantly trying to piece things together.” The legendary Shep Pettibone became a star on 98.7 Kiss, and along with Leroy Washington remains DeMairo's idol both as a DJ and a producer. “I couldn't believe he was white!” he says. “Without a doubt, he was the number one inspiration for me. What he was doing with edits 30 years ago people can't do now with Pro Tools or a multi-track or anything. He was so innovative. Everything he touched, even a record I hated, if he did it, I loved it.”

DeMairo is always quick to pay tribute to those who have shaped his love of music. DJs like Tony Moran and Albert Cabrera, also known as the Latin Rascals, who were exponents of the New York freestyle sound. The Dynamic Duo too, made up of his Henry Street co-hort Tommy Musto and the late Tommy Sozzi. “When I get in my mode of making mix tapes, Shep, Latin Rascals and the Dynamic Duo are there in some way. I'm like a walking medley. Every time I hear one track, I hear five records on top of it, with edits all around.”Making contacts among the DJ-only record pools, and then meeting the likes of Louie Vega, Todd Terry and Kenny Dope on the club circuit, DeMairo joined a promotion company called the Street Information Network, soon using it to create networks of his own; CJ Mackintosh in London, Terry Hunter in Chicago, 95 North in Washington, and, of course, all those New York connections. When it came time to launch his own label, the fledgling Henry Street (named after a cross street in his Brooklyn neighbourhood), he could call on the most smouldering of talents in house music to make it great. But that is another story...

This selection is about the tracks that would inform Henry Street, the tracks found deep within the complex strings of its DNA, the tracks championed by Pettibone on Kiss or by Washington at the Studio, or those dredged from crates across the city. Half-heard anthems from Italy tracked down through forensic research in the record shops of the five boroughs, rare dub versions of classics that you won't be finding on eBay anytime soon. This is real disco.“These are the secret weapon tracks, but more personal to me and people from my world. I'm pulling records from different places. This is how I play records. It's not fake. I have never been a 'set DJ' and always played just about every genre of music, from the fastest uptempo disco anthem, to the most ghetto rap jam to Zeppelin. Music is music. A good DJ can play it all. A great DJ can play it all technically correct!”