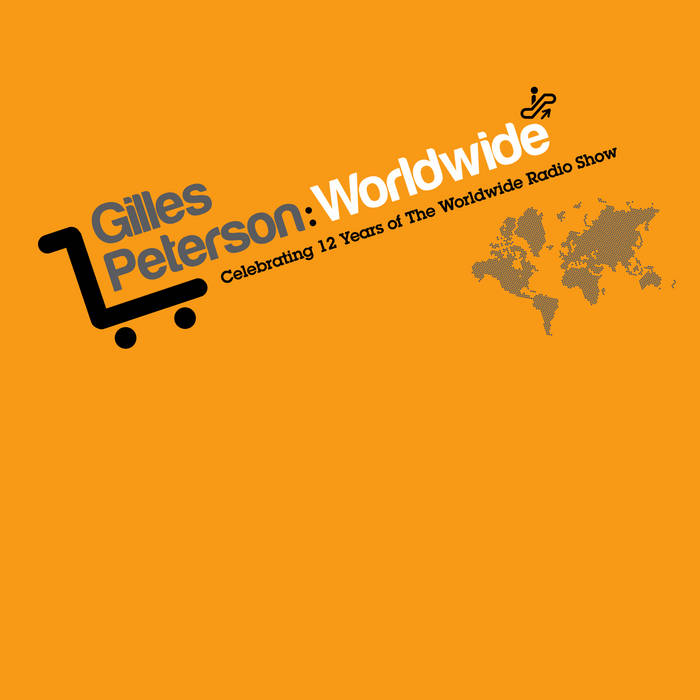 Gilles “Worldwide” Radio show has been broadcast on BBC Radio One since 1998. Not only does he ‘join the dots’ between artists, producers and styles, but he’s a DJ who places equal legitimacy on a Max Roach album and a Jig Master’s 12-inch. With WorldWide now broadcast in 15 countries from New Zealand to Croatia to

Nigeria to the USA to Cyprus, his popularity and message can only grow.

Brought up among the South London suburban soul scene in the early eighties, Gilles would avidly listen to listening to Level 42, Earth Wind & Fire, Central Line and the heavier, deeper pirate stations such as Radio Invicta.

This inspired him to set up his own station – literally an aerial suspended between a tree and a phone box – playing an eclectic mix of jazz, funk, reggae, soul and early electro. By a stroke of luck, Radio Invicta needed a new transmitter, so Gilles swapped his for a regular show on the station. At the same time, Gilles was a regular shopper at DJ Paul Murphy’s Palladin Records. Murphy also DJ’d at Camden’s Electric Ballroom, and his knowledge of rare, killer power jazz tunes and rare Afro-Cuban fusion was further inspiration for Gilles, who took over the decks in a baptism by fire when Paul left.

Once ensconced upstairs in the Electric Ballroom, Gilles’ understanding and insight into jazz, funk and soul grew exponentially. The music he played attracted an increasingly loyal following from a friendly, mixed crowd and his reputation grew.

Gilles soon began to play at Nicky Holloway’s Special Branch night at The Royal Oak. He says ‘the scene I was building was a cross between the casual soul-boy scene and the London trendy. I’d play upstairs with Chris Bangs and downstairs it was Rampling, Oakenfold, Holloway. That lasted three, four years, a very important weekly club that that scene would all go to. Out of that scene came nearly everything that we have today in the UK.’

1985 saw Gilles releasing the Jazz Juice compilation series, collecting together many of the jazz tracks Gilles had been playing over the past few years.

During this period, Gilles had also been working on new pirate radio projects at KJAZZ (later taken off air by gun-toting gangsters), Solar Radio and On Horizon, before ‘going legit’ with the BBC.

‘BBC Radio London was the first legal station I worked on. There were only a few legal stations at that time. I had my own show ‘Mad On Jazz’. We’d do live percussion, spoken word and we’d mix it all up.’

After leaving Radio London in 1986, Gilles started his Sunday sessions – ‘Talkin’ Loud’ & ‘Saying Something’ – at Camden’s Dingwalls. Co-hosted by Patrick Forge, these ran for five years.

Coinciding with the emerging acid house scene, the sessions became a natural magnet for post clubbing come-down kids. ‘Those five years were the best of my life as a DJ. Musically I did exactly what I was into, the Real Gilles Peterson trip’.

‘We put on this old 7-inch at by Mickey and the Soul Generation which was a rare groove record with a mad rock guitar intro and no beat. I started vary speeding it so it sounded all warped. Chris Bangs got on the microphone and said, ‘If that was acid house, this is acid jazz’. That’s how acid jazz started, just a joke!’

Shortly afterwards, Gilles started the Acid Jazz label. ‘It was a great time, but after two years I was beginning to feel the sound, the music and name was ghettoizing itself, it was becoming a mod thing, a retro thing.’

An approach to Gilles from Phonogram in 1989 to set up a new label saw the birth of Talkin’ Loud records, and releases from the likes of Brand New Heavies, Jamiroquai, the Galliano.

Back on air, Gilles’ show on London’s Jazz FM was axed in 1990 after he played ‘inappropriate’ music and made statements supporting peace during the Gulf War. Soon after, he joined the newly-legalized Kiss FM. His Sunday evening WorldWide slot proved one of the most popular on the station and he stayed there for eight years until he joined Radio 1 in 1998.

Gilles presents his Tuesday night/Wednesday morning show on Radio 1 at 2am-4am. He has also hosted his Gilles Peterson’s Worldwide Awards every year, the awards are an annual celebration of all the best new music that has come through every year on Gilles’ Radio 1 show, with some of the best new acts performing on the night.

Recently, Gilles has set-up a new record label, Brownswood Recordings, to sign and develop exciting new talent as well as putting on his Worldwide Awards every year in London and the Worldwide festival every summer in the south of France and his compilation albums have become legendary. He continues to be a breath of fresh air on the dancefloors of the world playing a unique selection of music that is rarely heard elsewhere.